A+ A-
Print Email
Stylish Star Allu Arjun’s upcoming movie is ‘Iddarammayilatho’. This movie has wrapped up its post production work and getting ready for a massive release.Here is the latest buzz that the makers of the movie are planning for a grand overseas release with more than 175+ theaters, this is one of the best overseas release in Bunny’s career.All Digital 4K and best screens in North America and most of the screens in other countries are also digital. We can expect a premier show in hyd on 30th (a day before the release). 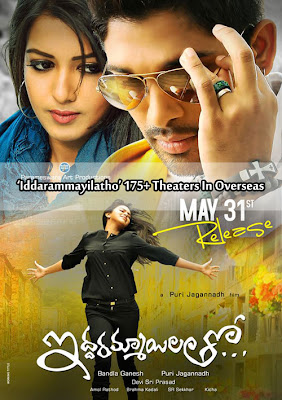 We all know that the film has completed its censor formalities and the censor board has issued “U/A” certificate with few cuts.And the movie is going to release on May 31st.
Bandla Ganesh is producing the film on Parameswara Arts banner.Recently the audio of this movie was out.Devi Sri Prasad is scoring the music to this movie.Amala Paul and Cathrine Theresa are romancing Allu Arjun in ‘Iddarammayilatho’ movie.