A+ A-
Print Email
Our viewers already know that Mega Powerstar Ram Charan is doing a movie Yevadu in the direction of Vamshi Paidipally. And the latest gossip revolving around the industry is to be believed, Pawan Kalyan is giving a voiceover for Ram Charan’s Yevadu film after the latter’s request to his uncle Power Star. It’s indeed good news for all mega fans but an official announcement from the makers is to be made. The audio of this movie is going to release on May 9th. 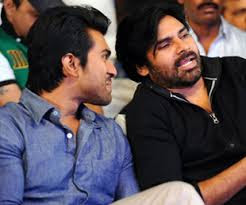 Actor Allu Arjun is doing a key role in this movie. This is the first time that Charan and Arjun are working together and sources say ‘Yevadu’ will set a new trend in terms of graphics, almost equivalent to Hollywood. Sources say the graphics are being done in Hollywood film ‘Face-Off’ style starring John Travolta, Nicolas Cage.
Amy Jackson is playing the second lead. Allu Arjun and Kajal Agarwal are playing important roles in this stylish action thriller. Devi Sri Prasad is composing the music. Dil Raju is producing it. Vamshi Paidipally is the director of this movie.