A+ A-
Print Email
‘Slumdog Millionaire’ star Freida Pinto has been crowned the ‘Hottest Indian Chick‘ by the US edition of men’s magazine GQ. The publication has become embroiled in a racism row after it included a series of new race-specific categories to its “100 Sexiest Women of the 21st Century” poll. The poll for the magazine’s latest edition included categories like ‘Sexiest Chinese Chick’, ‘Sexiest Indian Chick’ and ‘Sexiest Pregnant Sri Lankan’, reported by the Daily Mail. 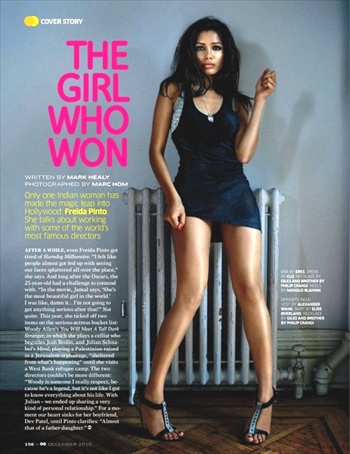 ‘Crouching Tiger, Hidden Dragon’ actress Zhang Ziyi was named ‘Hottest Chinese Chick’ while the title of ‘Hottest Pregnant Sri Lankan’ went to British rapper M.I.A.
However, Critics argue that while there is nothing wrong in principle with saying somebody is an “attractive Chinese or Indian woman”, singling some out for their ethnic roots and others not suggests they “are not beautiful simply because they are beautiful… but are only attractive in the context of their own ethnicity.”
For instance, while Pinto was crowned ‘Hottest Indian Chick’, there is no mention of Beyonce’s African-American heritage, Mila Kunis’ Ukranian roots or Kim Kardashian’s Armenian ancestry.